“That some achieve great success, is proof to all that others can achieve it as well.” Abraham Lincoln 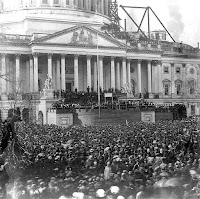 On January 20th two things will happen our new president will be inaugurated and I will be freezing in DC. Many people who are at work, school, or just don’t have TV have asked me where they can watch the inauguration. To this point I have put together a list of sites and places where you can watch it. Also I will try to do a bit of live blogging from the National Mall. If I have time and inclination I will put up some photos from the action on the ground. Did I mention freezing? On to the list.

All the major channels will stream it live.
Also some Starbucks coffee houses will have it on. My personal favorite so far is the movie theater. The idea of watching it on a giant screen with popcorn. It is after all political history but also political theater. The tickets are free but first come first serve. They are being shown at Providence Place Mall Cinema. That is all the info I could get without signing up.

NPR will be streaming so you can get that radio by the fireside in a darkened room sort of deal going (during the day).

Finally to put this all in perspective give this site a chance for some great histiry. They have Kennedy's and Reagan's inaugural. Really fascinating stuff.

Hope this helps.
Note: The photo is of Lincoln’s first inauguration.
at January 15, 2009